When OMB shooting with a digital SLR camera such as the 5D, audio becomes a tricky SOB.  I’ve had my own nightmarish experience stashing a Zoom recorder in a fanny pack, only to find out that a slight shift in my position turned the recorder off halfway through an interview.  Sorry, Mr. President, can you say all that again?

A number of people have begun using a device called the J-Cube (formerly known as the J-Rod), which mounts the audio recorder, shotgun mic, and wireless receiver on top of the camera.  I’ve never had the pleasure using one, so I checked in with two OMB shooters at Societche, Richard Parks and Vanessa Carr.  Richard had this to say: 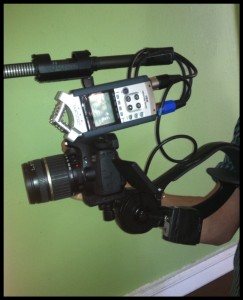 Hi Richard, how did you first get into using the J-Cube?
Audio was definitely a struggle before.  I had never used a DSLR for one-man-band shooting before getting the J-Cube, apart from an interview or two.  The amazing Vanessa Carr introduced me to it.  In fact, I was borrowing her gear the first time I used it.  When I finally ponied up for my own j-cube (pictured here), I ended up talking to the guy who makes them on the phone.  Lovely fellow. 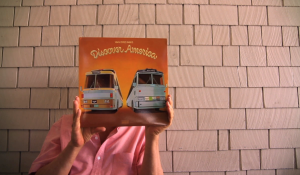 What type of shoot have you found it useful on?
Any time I’m shooting on my own, in verite situations, etc.  I used it for this reality TV”-style web show for Kraft, and I’ve been shooting a lot at Harborside with it.  But it’s a quick and easy set up for audio you can easy put together on your own.  I shot this (video pictured here) on the porch of my house with the help of the j-cube.

Hey, that sounded pretty good.  One problem I’ve had with Zoom-type-recorders is monitoring them while shooting.  Is it a problem that you can’t see the audio recorder screen when it’s attached to the J-Cube?

It is.  The way I set it up the screen is facing ninety degrees away from my face.  So you kind of have to know your way around the buttons on the Zoom, because the levels are adjusted on the side of the unit, and then you have to crane your neck around to look at the Zoom’s screen, almost at a perpendicular angle to the camera’s viewer, in order to keep a steady shot and adjust levels while monitoring. It looks funny. It’s not ideal but it’s just one of very many physical discomforts of shooting. 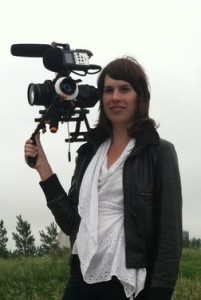 Vanessa Carr and the J-Cube.

Yeah, not perfect.  But better than stuffing it in a fanny pack, or taping it to your cat.  Are there any other drawbacks, precautions, or awesome benefits we should know about?
It’s best to get a wireless receiver with the little shoe-mount on it, as opposed to the clip, if you want to use the j-cube.  I use the Sennheiser with the standard clip, so I can’t mount it to the J-Cube. So I just gaff it to my hand-held thingy, which is also fine. And there’s an extra third mount on there I could be using. Maybe I should mount some kind of bling on it?

This entry was posted in Audio Tools. Bookmark the permalink.