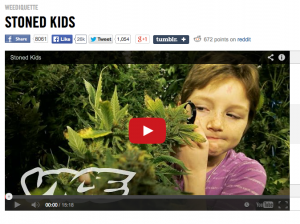 I shot this piece for Vice in rural Oregon.  How tricky was it?  Incredibly.  Filming multi-person conversations with one lav and one boom mic, and often these conversations included rambunctious children.

In this case, we had two lavs, but one wasn’t functioning.  (Vice works their gear pretty hard…) When you have no choice and must interview two people at once with one lav mic, put it on the quieter person, and make them sit or stand as close together as possible without looking unnatural.  Same goes for a verite scene–mic the most important person and keep the camera close to the other.

Weediquette is a hosted show, which means there will be multiple people in almost every scene.  In general, if I have one lav I don’t put the lav in the host, I put it on the subject.  The host is more likely to speak louder, and be closer to the camera so his/her questions will be picked up by the shotgun mic.  Also, the questions are almost always less important than the answers.  If something isn’t clear, or there is a total fail on the host’s sound, the editor can find a solution in post.  (In the case of Weediquette, they love narration.)  But unless you want to drive back out to rural Oregon, the subject’s audio can’t be recovered.

See if you can follow the lav jump from person to person in this piece, sometimes in the same scene.  Yes, I occasional stop a scene to switch a mic to the right person.  Chances are you wouldn’t have noticed but now, of course, it’s all you’ll hear.  As the kids say… my bad.

Posted in Audio Tools | Comments Off